While the radio station was set to the Armed Forces Radio Network, I was born in Wurzburg, Germany at the 10th U.S. Field Army Hospital.

My family relocated to Oklahoma when I was two years old.  At the early age of 5, I began playing ‘disc jockey’ spinning records in my room.
When I was in high school, I started my own business – a mobile D.J. for school dances.

I began my radio career at the age of 14 as a part-time disc jockey for a Top 40 AM radio station, KSWO 1380, in Lawton. While going through college, I worked at KGOU in Norman and KLAW 101 in Lawton.

Attaining my B.A. degree in Journalism and a M.A. degree in Communication from the University of Oklahoma, I became the News Director for KSWO Radio in 1985 and a Television News Reporter for KSWO-TV in Lawton.  As a TV reporter for five years, I covered crime, military, city government and general assignments. I was recognized by the Associated Press and United Press International and received awards including outstanding news coverage, best general reporting, spot news reporting and general reporting.

In 1991, I accepted a management position as the Program Director for KCCU public radio and as an instructor for Cameron University’s Communication Department in Lawton. My duties at KCCU included overseeing the daily operation of seven radio stations.

In 2007, my wife and I moved to Erie, PA where she enrolled in medical school at LECOM. I was hired at Mercyhurst University to manage the school’s radio station WMCE  88.5 JAZZ FM.

Among my duties, I was responsible for the station’s bi-annual membership drive, on-air promotions, and web page.

In 2011, I accepted the increase responsibility of Chair of the Communication Department.  As an instructor,  I taught New Media, Media Management, Professional Development, Business and Professional Communication, Fundamentals of Speech, Broadcast Announcing, Advance Audio Production and supervised the Audio Lab. I also worked with students who were interested in the radio industry as a career, assisting them with resumes and portfolios as well as on-air and production work.

My wife and I had an opportunity to move back to our hometown in Lawton, Oklahoma to be closer to family and friends. In the Spring of 2018 I returned to Cameron University where I taught in the Communication Department. In the Fall of 2019, I began work with the City of Lawton as its Arts Coordinator for the Arts & Humanities Division.

In my spare time, I am a volunteer firefighter in our local community. 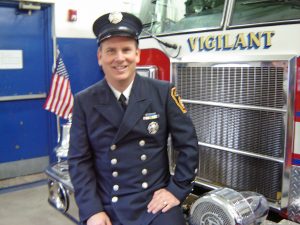 I have many years of extensive experience in higher education including administrative responsibilities, advising and recruiting students, and as an instructor in the broadcasting and communication departments.

I spent seventeen years with Cameron University in Lawton, Oklahoma and nearly five years at Mercyhurst University. During my time in Erie, PA I gained administrative experience to include Co-Chair of the Communication Department, and Director for the school’s public radio station.

Both jobs required me to be successful at building relationships and working with the administrators, trustees, board members, faculty, staff, students, alumni, and community leaders. This involves the effective use of my leadership, interpersonal and communication skills.

I have a B.A. in Journalism with an emphasis in news writing and a M.A. in Communication from the University of Oklahoma. I have computer experience in a variety of software applications from Microsoft Office Suites, Photoshop, and in college software programs like Blackboard. I am also responsible for the design and update of several websites. As an instructor of New Media, I also have extensive knowledge on the use of broadcast digital editing (Avid, Adobe, WideOrbit), social media, and web development.

I also have knowledge in community relations, advertising, public relations and fund-raising. I have created and maintained training materials for staff and volunteers and developed a training program for the radio station. An additional strength is my ability to create a public relations program designed to maintain a favorable public image for the department and to inform the public of the programs, accomplishments and goals. One of my responsibilities is to prepare and create publications that include informational materials about the radio station and the communication department that include writing newsletters, press releases, on-air radio promotional announcements, and brochures.

Audio Work:
StoryCorps – These are examples of the nearly two dozen local StoryCorps programs I produced, edited, and aired at KCCU radio. All of the stories were edited on Adobe Audition.

Barton:
Here is Diane Barton who is a registered nurse from Duncan, Oklahoma.  She talks with her son Jonathan Hooks about what it’s like to be a nurse for hospice and the emotional pain in taking care of a particular patient – Jonathan’s father.

Legrand:
13 year old Zachary Legrand talks to his father Steve, an Air Force pilot.  The two talk about Zachary’s grandfather Pops and his time in the Marines during World War II.

Doman:
A mother-daughter conversation – reflecting on the struggles of life and death.  Here is Wendy Doman of Duncan, Oklahoma with her 13 year old daughter Raquel.

Johnson:
79-year old Albert Johnson Sr. reflects back to the days when he was a high school principle for an all black school during desegregation.

Admas:
Dana Stone and her Father Walter Adams talks about his trip in 1977 to Washington D.C. during the Farm Strike – The American Agriculture Movement.

Sosa:
Cynthia and Gilberto Sosa talks about his life in the U.S. Army and how it saved him from a life of crime.

KCCU On-Air – Worked as the Program Director for KCCU Radio from 1991 to 2007.  This is an example of hosting the local Morning Edition during the station’s membership drive.

WMCE Promo 1 – Worked as the General Manager for WMCE Radio from 2007 to 2012.  This is an example of station promos for the all jazz radio station.

WMCE Promo 2 – Another example of a station promotion done at WMCE Radio.